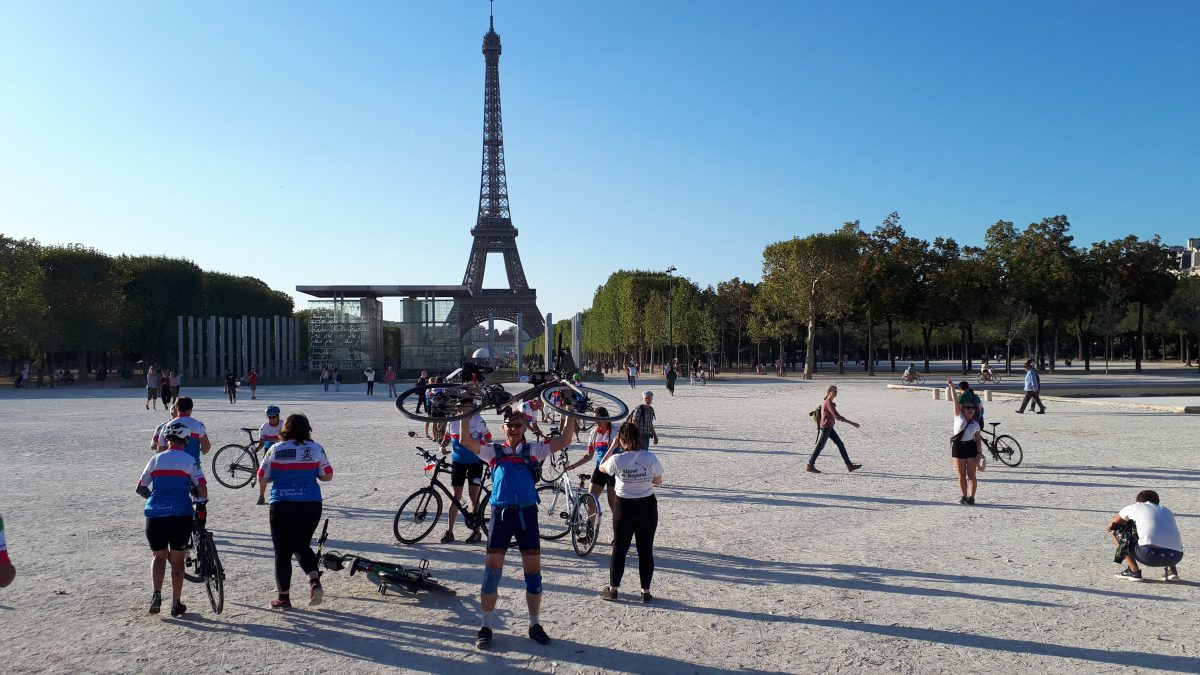 Above and Beyond raised over £105,000 for the BRI Hospitals cycling 470Km for Bristol to Paris.

Fifty Three cyclists took part in the cycle which was hosted by Classic Challenge.

The event was over 4 days with the first leg starting at Ashton Court Gold Course. It was starting to rain and there was a chilly wind, once we got going into Bristol we were less exposed and I didn’t notice what the weather was doing. The highlight was riding past the BRI as a great number of Staff were outside cheering us on with their umbrellas up.

I felt emotional, for the first time after months of training and fundraising this was what I was had been working to achieve. The Fundraising was to pay for specialist equipment and research practically for doing this for Children’s Hospital.

Before the ride Ed had read an email that was sent by the mother of a very sick little boy. They were going to attend the launch but unfortunately her poor son had been taken ill and was having treatment that morning.

This brought home how life can be such a marginal survival for some and how fortunate I was to be healthy.

We meandered back to pass the BRI again to the cheer and applause of the crowd. It was an inspiring moment.

We made our way with Gideon guiding us towards the cycle tract to Bath. After a break in Bathford we continued following the yellow arrows marking our way when we encountered Box Hill the first long climb, a killer hill. Ed Haysley was passing me and said “take it easy on this one its very long”

“Oh do you know it” I replied, my legs were burning at this stage. “Yes its my regular ride, I live near hear”. He quickly shot ahead.

When we got to Salisbury plain I seemed to be flying, the undulating road suited my gearing and cadence. It was still raining when we reached the Premier Inn near Salisbury. The second day was bright and sunny so I applied plenty of sun cream. My bum ached a little, though the overnight rest had revitalised me.

We cycled through quiet country lanes and picturised villages of Hampshire passing the outskirts of Winchester before reach Southampton. I started singing Cliff Richards “Summer Holiday “and Dominick joined in it was fun!

At each rest break we were able to top our water bottles and take on carbs, while the mechanics sorted out punchers and breakdowns. Gideon gave a briefing before each section warning us of hazards and in this case the busy commuter traffic in the evening at the Port where we were catching the Ferry to La Harve. We were late boarding the Ferry and I didn’t finish showering until 11.00 pm when I went to sleep. It was a comfortable Birth with just myself and Paul sharing.

Next Morning we regrouped and collected our bikes from the box van, there was a slight drizzle and overcast so were prepared for more rain as we left the Port of La Have. Rods were smooth and plenty of cycle laines, the French drivers seemed to be more thoughtful towards cyclists slowing down and patiently waiting to pass.

On the outskirts of La Have we encountered the first of many climbs, this one seemed to go on for ever meandering upwards, after 40k we stopped for the first break at a patisserie, I couldn’t resist a croissant au chocolate and a strong Coffee. This was our longest cycle, previous days were around 90k but today we had 144k of predominately climbs. I seemed to be constantly passing the Brean Team with their expensive carbon fibre cycles. Sarah, Ally Kieron and Dave cheered me on, but I’m sure they must have wondered how at my age with a weighty hybrid I could do that.

The truth is this was an endurance cycle not a short race, I realised it was more to do with your weight, stamina and nutrition. There were several skinny ladies who seemed to fly irrespective of the type of bike, they were lighter and cycle fit.

Those carbon fibre bikes are not as comfortable and if the rider weighs over 100Kg the lightness of the bike is lost. My months of long cycle rides had paid off although I still think I could have done with a few longer 100km runs. Even so I had to dig deep to do the final 10km to the overnight Hotel in Gourney en Bray. Lunch on both days was at French Golf Clubs, the food was superb. Our final day was bathed in sunshine as passed through the rolling French countryside. Spirits were high as we regrouped in a forest on the outskirts of Paris. We all made it, we arrived to a Champaign reception with relatives and the support team welcoming us to Paris overlooking the Eiffel Tower, an incredible moment!

53 riders of mixed ability, age and gender had completed 470km raising over £105,000 between us. I had taken part in many other sports events even sailed Challenge Yachts with Che Blyth but this was by far the best achievement to date.